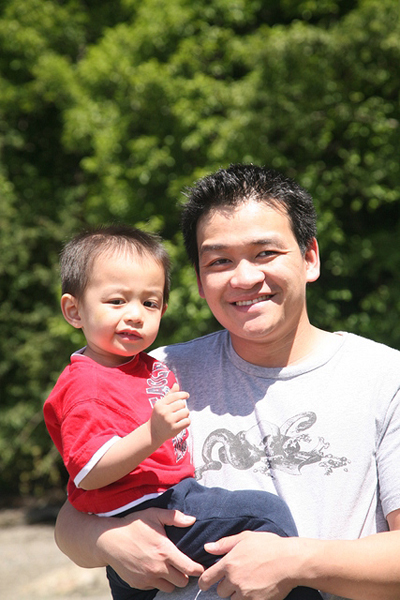 I, Nguyen Thanh Trong Cardin, a father, technology blogger, social media evangelist, & entrepreneur. I’m a proud Vietnamese-American who was born in Tay Ninh, Vietnam and raised here in Olympia, Washington. I was the last group of Vietnamese boat people that fled Vietnam for a better country in 1987 with my father. At age 3 my father said that we’ll be going to Saigon (now Ho Chi Minh City) to buy me a gun. For several months out at sea; my most memorable memories would be when I became upset and threw everyone shoes & slipper off the ship because all see was ocean and no toy “gun” like my father has promised. We arrived in Philippines and stayed there for couples of months. After the hardship that my father and I held hands together walked this hard path to the land of the free. I thank my father for his courage to hold me in his hands and walk this path to an easier life. So here I am with my father, mother, Nghia, Tai, and me in this wonderful shelter. I started my career in Computer Science in 2001 at Western Washington University while operating Invincible Host out of my studio apartment. I ran two big website (Flogao.com.br & Tibiafans) with two other partners for 5 years making over 7 figures at year. I decided that I want to sell my part of the share, but later in 2005 I found that my partners has sold the company to Power without my knowledge. My stupidity was having the whole business servers under my name but no access to the domain. From there on I learned my lesson about how hard life can be here on earth. Due to the successful of the website I had a huge expense and spending problem. Therefore I had to declare Chapter 13 bankruptcy to get out of the hell out that I dug for myself. Today, I’m a single sucessful father (soon marry again in November 2010), leading developer/project manager for Cameo Management Group running several sites (Corset Connection, VersatileCorsets, etc), free lancer worker, and & entrepreneur. While I specialize in servers, networking, social networking, I also cover all aspects of the world wide web with a fresh and independent perspective. Last but not least, I have found a great partner Nancy Lynn, who gave me the ability to trust again as my partner on this road to success again. Trusting is hard but we all have to give everything a try again. We’ll always have a friend out there who’s been through similar issues. Today, we are working together improving many sites such as Corset Information and other websites that we’re developing day by day. That’s it for simple intro.